New quay opened at the industrial port in Bremen 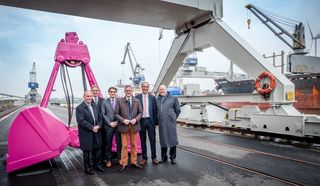 After a building period lasting three-and-a-half years, the port logistics firm Weserport, the “bremenports” company and invited guests from the worlds of business and politics celebrated the new construction of a quay at Terminal 2 of the Hüttenhafen in the city of Bremen on 3 November. The new development is associated with the extension of the docks there and the deepening of the industrial port in Bremen. It has been possible to eliminate a long-standing bottleneck at these docks through the extensive building project.

The key element in the project completed by “bremenports” and Weserport was the dismantling of the previous quay and the new construction of a 250-metre long quay that has been relocated three metres further inland next to Terminal 2. Panmax vessels can now be handled there too, thanks to the improved nautical conditions.

“While ships with a maximum draught of 9.45 metres were able to dock at the Hüttenhafen in the past, it’s now possible to unload vessels with a draught of up to 10.50 metres, following the extension work. That corresponds to as much as 5,000 tonnes of additional cargo, depending on the size of the ship. It’s our goal to attract additional customers to the industrial port through the improved conditions,” says Heiner Delicat, Managing Director of Weserport.

“The industrial port is a power house at the ports in Bremen,” says the managing director of “bremenports”, Robert Howe. “As a result of the building work at the Hüttenhafen, “bremenports” can make a contribution towards ensuring that this part of the ports area in Bremen is geared for the future.”

Weserport handled the necessary adaptation work to the superstructure within the project. This included work on the railway tracks, reinforcing space for heavy loads and moving the two gantry slewing cranes that have been modified.

Weserport, a joint venture between the Rhenus Group and ArcelorMittal Bremen, operates four terminals at the industrial ports in Bremen; they cater for storing and handling steel, building materials, containers, bulk and break-bulk cargo and project loads.

About Weserport
Weserport GmbH is a joint venture between the Rhenus Group and ArcelorMittal Bremen GmbH. In 2016, Weserport’s four terminals handled about 8.1 million tons of goods shipped by sea. The Rhenus Group is a logistics services provider with global business operations and annual turnover of EUR 4.8 billion. Rhenus has business sites at over 580 locations worldwide and employs more than 28,000 people.