The New Silk Road - Connecting The Orient To The World

The Benefits of Cost Vs Time Optimization 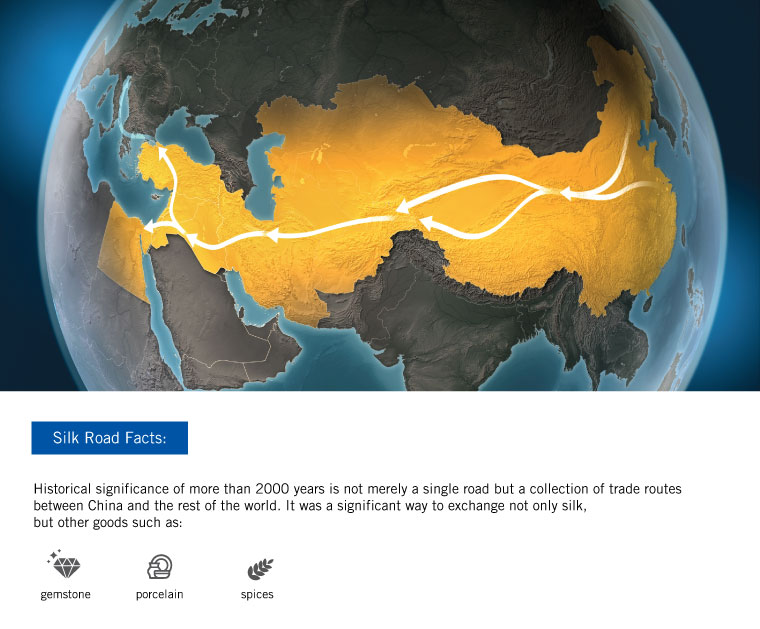 Over the centuries, however, the development of sea routes diminished the importance of the ancient Silk Road. But with the latest megaproject of the Chinese Government called "One Belt, One Road" (OBOR), the trade connections between East and West are experiencing a fresh upsurge.

The network of transcontinental rail links between East and West, also called Landbridge, is steadily expanding. There are six corridors either already operational or planned to open soon, with the aim to link Asia with Europe and Africa.

At the same time, to promote economic cooperation between the Eurasian countries, Chinese banks have lent around $200 billion in loans to around 2,700 BRI projects [1] in the last five years. Additionally, dozens of bilateral government agreements have been signed, with the participation of more than 90 countries.

The Landbridge is currently being used for transportation of mainly consumer goods, high-quality electronics, spares, machine components, steel pipes and cables. Dangerous Goods (DG) transportation, however, is not allowed in China as it is tightly regulated by the China Railway Corporation.

The key benefits here are that delivery times can be shortened and costs reduced. Traditionally, much of the cargo between Europe and Asia has been transported through sea freight with an average lead-time of 40 days. Rail transport manages to do this is around 20 days, making it a faster option. Although the cost of transport by rail is higher than by sea freight, they are still considerably cheaper than air freight. Companies that routinely use the landbridge for transportation can reduce their inventory levels. Due to overall high storage costs, the savings outweigh the even more expensive transport costs.

As of August 2018, more than 10,000 train trips have been completed between 48 Chinese and 42 European cities. [2] At the beginning of January 2017, the first freight train from Yiwu, on China's east coast, brought 24 containers to London. [3] Three months later, the eastbound train from London to Yiwu saw an encouraging 25% increase in the number of containers. [4]

In addition to transport, logistics service providers offer special value-added services that include the consolidation of goods in partial and full loads, real time tracking, customs clearance and insurance of goods and delivery to the end customer on the last mile. Particularly, the customs procedures are subject to the different requirements of the respective countries and are a challenge in themselves. It is therefore advantageous to have well-interlinked partners in the countries of origin, transit and destination for smoother business operations.

As a globally operating company, the Rhenus Group, one of the leading logistics service providers in Germany, sees great potential in the Landbridge project, despite many uncertainties involved. The company's Air & Ocean business segment offers the "Rhenus Landbridge" product, for partial and complete freight transport by rail between China and Europe. Three different routes are used: two from China via Kazakhstan or Mongolia and Belarus to Europe. There is also the Trans-Siberian route via Russia and Belarus.

In 2017, Rhenus Road Freight East launched the “Rhenus Silk Way” project, which will connect Europe and China through existing and new hubs by 2020. Turnstiles in Milan and northeastern China have already been set up last year and new partial cargo connections between Western Europe and eight Russian cities have been established. In addition to the development and construction of European, Russian and Chinese hubs, further transports to Russian regions as well as a Green Customs Corridor with automated customs clearance will be created. A new logistics center in southern Russia is also being planned as a link between Europe and China, especially for customers from the agricultural sector.

Along with an extensive network of partners, the Rhenus Group has its own branches in China and many other OBOR countries, including Russia, Belarus, Poland, Lithuania, Kazakhstan, Ukraine, India and Southeast Asia. This on-site expertise is the key to ensuring safe, fast and efficient transport of goods and Rhenus is eager to capitalize on the opportunities presented by the “One Belt, One Road”.