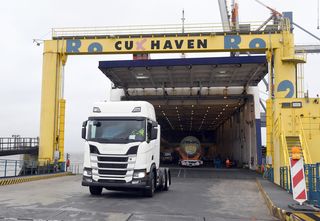 RoRo vessels operated by the French shipping company, LD Seaplane, have now started a regular service to the port of Cuxhaven. The ships, which specialise in operating project cargo, are currently transporting new trucks from France to Cuxhaven for the German market.

The basic cargo on board the LD Seaplane vessel “Ville de Bordeaux” consists of parts for the aviation industry; shipments of project cargo or automobiles are also possible. It is feasible to include the stop at Cuxhaven in the current timetable because of the fast and flexible turnaround times at the Cuxport terminal. As a result, Cuxport is expanding its range of services as a hub for northern European short sea traffic with an additional route.

“Cuxhaven has been able to demonstrate its strength through the efficient handling operations at the Cuxport terminal and thus illustrates once again the huge potential at the port. The prerequisite for the successful expansion was and is still the excellent cooperation with the shipping agent, Herbert C. Meyer in Stade,” says Oliver Fuhljahn, Head of Automobile Logistics at Cuxport. The “Ville de Bordeaux”, which is 154.15 metres long and 24 metres wide and was built in 2004 will call at Cuxhaven each Thursday; the new RoRo service will be used both for imports and exports.

Julien Brault, Commercial Manager at LD Seaplane, adds, “The new route to France is also significant because it creates a link between the German offshore industry centre in Cuxhaven and the offshore wind industry in France. We believe there is a great deal of potential to expand this business.”

The portfolio of short sea routes served from Cuxhaven currently includes destinations in Denmark, Estonia, Finland, France, Great Britain, Iceland, Norway and Sweden. Cuxport will present the new route to Saint-Nazaire and its other services at the Breakbulk Europe exhibition in Bremen on 29 – 31 May.

About Cuxport
Cuxport GmbH operates a multi-functional handling terminal at the deep-water port of Cuxhaven. Cuxport not only provides extensive port handling facilities, but also has an ideal geographical location for all kinds of maritime traffic and the best possible links to destinations further inland. The company is a joint venture where Rhenus SE & Co. KG holds 74.9 percent of the shares and HHLA Container Termains GmbH 25.1 percent. The Rhenus Group is a logistics services provider with global operations and annual turnover of EUR 4.8 billion. Rhenus has business sites at over 580 locations worldwide and employs more than 28,000 people. Hamburger Hafen und Logistik AG (HHLA) is one of the leading logistics services companies at the North Sea ports.