The turnover of Rhenus Svoris last year increased for one fifth 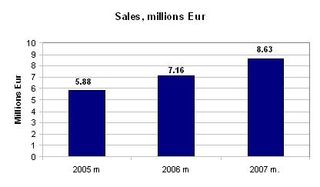 One of the biggest Lithuania‘s logistics companies UAB „Rhenus Svoris“ constantly increases the number and turnover of the transported shipments. Today the company declares the results of the last year. In 2007 the sales of the company increased for one fifth and reached 30 mln in comparison to the year 2006.

During the last three years „Rhenus Svoris“ revenue increased on the average 24 % every year.

The increment of turnover was determined by some reasons. It was influenced by the increased number of the transported shipments, the constant improvement of the service quality and loyal customers, who commit  more and more logistics tasks to the company. „Rhenus svoris“ transported almost 38.000 shipments – that makes 3.500 shipments more than in the year 2006 –  during the year 2007. The number of regular lines increased from 24 till 32. Accounting system with barcode was implemented in warehouse and greatly eased the management of  the warehouse.

„We are going to increase the volumes of transportations approximately 15 % this year. At the moment the most important goal of the company – to render the package of all logistics services in Latvia and Estonia. We will hold on to our selected, constant growth strategy, i.e. to attract as many as possible loyal customers, who need versatile and long-term organization of logistics” –marks Arunas Bertašius, the general manager of Rhenus Svoris.

At present 64 people work in the company „Rhenus Svoris‘ and more than 3,000 shipments are transported per month.

About Rhenus
The Rhenus Group has annual turnover of €3,3 billion, making it one of the world’s leading logistics contractors. It has over 15,000 employees based at 230 locations worldwide. Rhenus’s Contract Logistics, Freight Logistics and Port Logistics business areas manage complex supply chains and provide a wealth of innovative value-added Services.