Cuxport’s new berth no. 4 is the installation port for the Deutsche Bucht wind farm 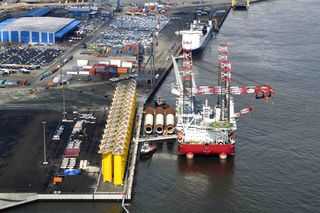 Even before it has been officially opened, berth no. 4 at the Cuxport Terminal in Cuxhaven is already the location for its first offshore project. Cuxport is supporting Balance of Plant contractor Van Oord at the new heavy-lift berth with a total capacity of 8.5 hectares of space. This is being used to store and tranship the monopiles and transition pieces for Northland Power’s Deutsche Bucht wind farm, which is currently being built in the German Exclusive Economic zone (EEZ) in the North Sea.

31 transition pieces for the wind farm have already been supplied to Cuxhaven from Spain on board the “Happy Star” heavy-lift vessel. The segments, which weigh more than 300 tonnes each, were lifted onto the quay at berth no. 4 by the ship’s own crane and are currently being stored there in their installation sequence.

31 monopiles, each weighing around 1,100 tonnes, are being transported by barge from Rostock to Cuxhaven just in sequence and directly lifted from the barges to the installation vessel that is jacked up in front of berth no. 4. The jack-up vessel will then also load-out the transition pieces from the terminal and start her journey from Cuxhaven to the offshore construction site.

Rhenus Offshore Logistics takes on the function as port agent for the project, including the customs clearance and the crew changes.

“By using the ship’s own cranes, it’s possible to complete the project without any shore crane. The fact that this new berth is being used for this project so soon after its completion shows how essential it is,” says Roland Schneider, Head of Business Development at Cuxport.

The Deutsche Bucht wind farm is Canadian power producer Northland Power’s third North Sea offshore wind project. It has an allocated grid connection capacity of around 269 megawatts and is located about 95 kilometres northwest of the island of Borkum in the German Exclusive Economic Zone. It is 77 kilometres from Northland’s other German offshore wind project known as Nordsee One – and Cuxhaven served as the base port for this, too.

The Deutsche Bucht wind farm will have a total of 33 wind turbines, 31 on monopiles and two on so-called Mono Bucket foundations. It is the first time this new type of foundation structure will be tested under commercial operating conditions. The 33 MHI Vestas offshore wind turbines can each generate up to 8.4 megawatts of power.

About Cuxport
Cuxport GmbH operates a multi-functional handling terminal at the deep-water port of Cuxhaven. Cuxport not only offers extensive port handling facilities, but also has an ideal geographical location for all kinds of maritime traffic and the best possible links to destinations further inland. The company is a joint venture where Rhenus SE & Co. KG holds 74.9 percent of the shares and HHLA Container Terminals GmbH 25.1 percent. The Rhenus Group is a logistics services provider with global operations and annual turnover of EUR 4.8 billion. Rhenus has business sites at over 610 locations worldwide and employs more than 29,000 people. Hamburger Hafen und Logistik AG (HHLA) is one of the leading harbour logistics companies at the North Sea ports.